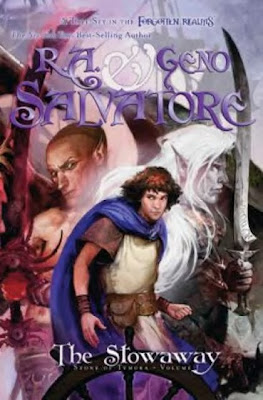 The Stowaway is the first young adult/middlegrade book in the fantasy trilogy Stone of Tymora, written by the best-selling father and son team R. A. and Geno Salvatore.

In it, we meet a 12 year old boy that has been tracked by the demon Asbeel his whole life - and he doesn't even know why. And when circumstances leave him fending for himself, he ends up a stowaway on the Sea Sprite, a ship holding, among its varied passengers, the unusual elf Drizzt Do'Urden. As he tries desperately to get as far away from Asbeel, sailing down the coast of the Sea of Swords proves itself dangerous as well. But foremost on his mind is the mystery of why he is orphaned and alone - and incessantly hunted.

At first The Stowaway looks to be a heavy duty fantasy fiction novel - filled with so many different creatures and places your brain feels fuzzy trying to keep it all straight. But if, as I quickly learned, you allow yourself to really sink your teeth into it, The Stowaway sweeps you away into a whole other world. A world packed full of adventure, in the truest, most epic sense of the word.

Though the first few lines make it easy to empathize with the main character, it took some patience to get a real sense of him because of the direct jump into action. But before long, the interesting non-chronological way the story is told gives the reader (that is, me) a chance to take a breather and look into this boy's past - and, man, what a difference that makes! Once I got that background insight and came to really care for him as a character, every sword-wielding fight sequence held more suspense and excitement! Not that there was never a action scene that could've, perhaps, been a bit shorter - but with the great quality of writing involved I had no actual complaint.

I began to really enjoy the immersion of elves, trolls, demons, wizards, and pirates - not to mention the mysteries and questions that linger unanswered, yet seem to assure future explanations. Plus the unique storytelling method intrigued me and made me all the more curious about the future books in the trilogy!

By the final pages of The Stowaway, the Sword Coast felt real, completely and fully realized - a place you could go to, if only you knew how.

This is a very good, epic-like journey with awesome character depth - easily recommendable to those of you bibliophiles that love fantasy - and even those of you who don't necessarily go for this "type" of book. Believe me, it's worth a shot!

And if you are an eagle-eyed reader and noticed that I never mentioned the main character's name... that's because the way it was revealed in The Stowaway was meaningful to the overall plot, at least to me (which could mean it'd be no big deal to you, since I'm super spoiler-sensitive). So, I would suggest you don't read the jacket. I know, I know... broken record, right? Well, a bibliophile looks out for her own! ;)

One final note: the cliffhanger end made me very relieved I had the second book, The Shadowmask, ready to rip open right away!

June 07, 2010
Middleworld is a middlegrade fantasy/adventure novel by Jon and Pamela Voelkel and the first of the Jaguar Stones trilogy.

So before he can even digest this turn of events, his parents are gone and he is all alone with Zia, the odd housekeeper. But in yet another sudden twist, Max is shipped off to San Xavier to be with his parents, because, apparently, they need him. His estranged Uncle Ted isn't all that friendly - and Max quickly realizes that his parents didn't send for him - they're missing. And there might be something…
2 comments
Read more