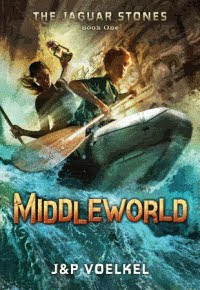 Middleworld is a middlegrade fantasy/adventure novel by Jon and Pamela Voelkel and the first of the Jaguar Stones trilogy.

So before he can even digest this turn of events, his parents are gone and he is all alone with Zia, the odd housekeeper. But in yet another sudden twist, Max is shipped off to San Xavier to be with his parents, because, apparently, they need him. His estranged Uncle Ted isn't all that friendly - and Max quickly realizes that his parents didn't send for him - they're missing. And there might be something pretty sinister and evil going on with some ancient Mayan artifacts.

Alrighty - I thought that the premise was a pretty creepy and intriguing way to kick things off. Max is relatable, though maybe a little bratty and spoiled (and, honestly, who doesn't like tamales? lol)- but as time went by I came to really appreciate his sarcastic, dry sense of humor, which led to some awesome descriptive lines, such as calling the trees of the rainforest "evil mutant broccoli," and a wizened old man "a Maya version of Gandalf". The writing is brisk and modern with these current, fun descriptions.

Throughout Middleworld there are cool drawings, and at the very end of the novel there is a glossary of information about the history and mythology of the Mayan people. The cover is really nice and draws you in to the epitomization of action/adventure (though when reading the novel, you realize the the facial expressions should be switched).

There is an interestingly weird, constantly suspicious tone from the very start of the novel and it very quickly takes off into the mystery, though it is subtle at first. Unlike most middlegrade books, there is a sense of real, pressing danger - and the plotting and characters (such as Lola, a young Mayan girl who comes to help Max, who is a great, strong, capable, athletic, and smart heroine) kept calling for me to return to it after setting it down.

The rainforests of San Xavier (a fictional version of modern-day Belize) are described in vivid, colorful imagery and recalls old Indiana Jones movies. There's a great chemistry between Max and Lola, and though Max can be upsettingly immature, he also has surprising character development as the novel progresses.

By the end of Middleworld, I was quite involved in what becomes a notably scary climax and was ready for the sequel immediately. I look forward to when the next book in the Jaguar Stones trilogy comes out and I can rejoin Lola and Max in this fun, supernatural action/adventure that certainly is NOT just for kids!