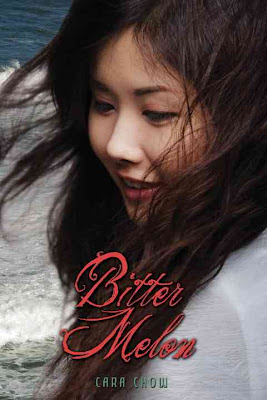 As a big fan of Cara Chow's debut novel Bitter Melon, I am thrilled to welcome her to the Bibliophile Support Group to share a little about herself.

Read my review of her book here, and then delve more into the author here:

I’m not exactly a Luddite, but I am slow to pick up new technologies. While I embrace innovation on an intellectual level, on a gut level I am a rigid creature of habit who is prone to stress and resistant to change. I’m the type of person who will wear the same tee shirt or jeans for years until they get holes. Then I’ll go to the exact same store to look for the exact same shirt or jeans, only to find that that model has been discontinued. Another example: my mom bugged me for years to get a DVD player, but I insisted that my VCR worked fine, so why spend the money? (“Why does she sound so annoyed?” I thought. “I’m an even bigger tight wad than she is. She should be impressed.”) Then one day, I went into Blockbusters to rent a film, only to discover that there were no VHSs, only DVDs. Only then did I break down, join the rest of the world, and get a DVD player. But even then, I was behind because everyone else had already abandoned Blockbusters for Netflix. When my husband bought our digital camera for our family reunion in Hong Kong and China, I was intimidated by this new machine, so I made him learn how to use it. During the entire trip, I kept slapping him on shoulder and pointing every time I wanted him to take a photo. He went home with a very sore shoulder.

So how does this quirk relate to my writing life? I’ve sent emails to my colleagues in New York, who are three hours ahead of me, late at night or on weekends, thinking that they would read my messages at 9am the following workday after strolling into the office and downloading my emails from their desktops while sipping their morning coffee. Instead, I’d get replies at 9:30pm or on a Sunday. “How did they do that?” I’d think, totally astonished, until I realized that other people have Blackberries and iPhones.

There is one exception to my resistance to technology. I embraced the word processor and the PC as soon as they came out (or rather, as soon I found out about them, which may not be the same thing). I’ve always suffered from a severe writer’s block that is related to my thinking process—which is not very linear—and my fine motor skills—or lack thereof. I’ve always had difficulty using a pen or pencil. My fingers strain to form the letters, and I either produce misshapen letters or skip letters all together unless I concentrate on my fingers, which impedes my ability to articulate ideas. The computer freed me to write without worrying about my penmanship. I could delete and cut-and-paste. I felt like I had traded in crutches for wings. Without my computer, Bitter Melon may have taken two decades to complete instead of one!

You know, I recognize a lot of me in that lack of technology aspect of Cara Chow's personality. How about you, bibliophiles?

Thanks for joining us Cara! I'm sure I'm not alone in saying that I can't wait for whatever you'll bring us next! :)

I'm Kate Evangelista, author of Taste, and I just wanted to take this time to introduce myself. If you have the time, please stop by The Coffee Bar by using the link below:

I hope to see you there.

Angie said…
Nice to meet you, Kate! Thank you for stopping by, and I hope you are a frequent vistor of the Bibliophile Support Group!

May 23, 2018
Next Wednesday y'all will be getting my oh-so-humble opinion of Evangeline of the Bayou , the Summer 2018 Kids' Indie Next List selection! (That means it was picked via booksellers at independent bookstores countrywide.) Until then, I have a Q&A with the Louisiana born and raised author herself: Jan Eldredge! (Don't forget to come back next week for my review!!) A Conversation with JAN ELDRIDGE Author of Evangeline of the Bayou 1) The glossary in the back of the book is so helpful! Where did you learn about all these creatures? Which creature from the book is your favorite? I have a small, but growing, collection of books about mythical creatures around the world. If I couldn’t find what I was looking for there, I researched library books, online websites, and the occasional documentary. Something that really surprised me as I started learning more about mythical monsters was the number of different cultures that share very similar
12 comments
Read more

July 14, 2017
In my final day of participating in the I Read YA Week celebration (you can keep partying, it goes on through Monday!), I found myself presented with a new challenge of: Create a graphic showcasing an inspirational YA quote. I'm not super tech savvy and I've never created a graphic before. But with just a little Google searching and a download of an app, I was able to create this: Thanks for joining me this week! I hope you all enjoyed it! Please follow or subscribe for notifications of new posts and reviews upcoming on the Bibliophile Support Group! #YAStandsFor @IReadYA
8 comments
Read more