The End of the World Club 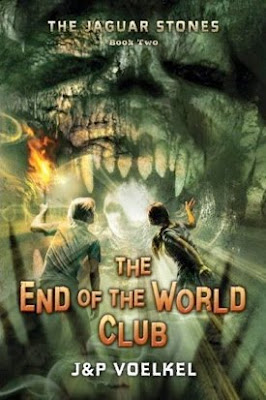 The End of the World Club is the second middlegrade/YA book in the Jaguar Stones trilogy coming out in December, written by the husband and wife team J & P Voelkel. To read my review of the first book in this exciting trilogy click here. Which I heartily suggest to any of you that have not yet read it. Do NOT read this review of The End of the World Club if you are uninitiated to the trilogy. Please. You'll break my fragile bibliophile heart. You can also read my interview with the authors back in July here.

Alrighty. Now we pretty much pick up where we left off. Or at least, soon after. Max Murphy is nervously awaiting the results of his deal with the ancient Maya Lords of Death, in which he rescued his parents from the horrible Maya underworld Xibalba. Because he agreed to owe them a favor... and he doesn't fulfill his end of the bargain not only will his parents be dragged back to Xibalba, but Hermanjilio (a friendly archaeologist and university professor) and Lucky Jim (Max's Uncle Ted's foreman and bodyguard, who currently is not so lucky) will stay in the underworld forever... and Max will die a not so pleasant death.

As Max is dealing with his worries about this (and who wouldn't be?) and figuring out why his parents seem to have become suspiciously amnesiac over everything that happened San Xavier - the Lords of Death call in their favor. Ends up there is one jaguar stone that they do not yet have. The Yellow Jaguar. They want Max to find it and deliver it to them within ten days.

Horrified by the time limit and the fact that every time Max asks his parents a question they break out in some kind of terrible, painful illness or injury - Max calls up his adventurous and pretty Maya friend that helped him in San Xavier, Lola, and her two howler money pets that have been inhabited by the ancient Maya king Lord 6-Dog and his mother, Lady Coco. But even with their help, there is no way that this task is going to be easy - or unhindered.

As a huge fan of Middleworld, I was thrilled to read The End of the World Club - and my expectations were exceeded. First we get a creepy, nightmarish start that is still infused with the Voelkel's fantastic, biting humor. And, thankfully, they gave a good, fast, little recap of Middleworld to help me out - as I am still too desperately busy with new books to have a chance to reread the first book.

Max's parents' desperate attempts at denial over their experience in Xibalba and the existence of the Maya mythology provides much excellent fodder for our lead character's signature, awesome sarcasm, which is truly beloved to me. With San Xavier apparently having followed Max's family home to Boston (jungle in the hallway, snakes, exotic birds flying about the kitchen, pouring rain nowhere but on the Murphy residence) it makes it particularly funny when Frank and Carla Murphy continue to grasp for "sane" explanations. Especially since this remnant of San Xavier has brought along the same vibrancy, dangers, and mystery of its colorful jungle.

The End of the World Club has great details and strong character traits, mixed with absolutely beyond amusing bits - such as Max's dad still finding time to correct Max's grammar as Max is trying to have a conversation with him over the seriousness of the world ending. These slices of laughter-inducing dialogue keeps this second Jaguar Stones book disarmingly snappy and thoroughly entertaining.

I, of course, don't want to give too much of the novel away and steal joy from your reading experience. So, I am keeping most of the details I provide from the very early stages of the book. You seriously do not want to have anything given away from The End of the World Club! :)

Though The End of the World Club is officially a middlegrade novel, I stress the importance of, well, ignoring that. In my opinion it is a fantastic read for every age, and some of the jokes (for example, the Death Lords have replaced their messenger due to focus group results) can only be savored by an older book nut - such as moi.

There is a fun, refreshing irony that juxtaposes the gross, rather disturbing hellhounds and Death Lords. The End of the World Club zooms along with an adventurous buzz, taking the delighted reader (i.e., me) to Spain, constantly piquing interest, introducing new questions, and visually stunning the imagination with crystal clear scenery.

The action/adventure mixed with hair-raising mythology and zany humor is a truly terrific combo. In fact it is sometimes scary, gory, and yucky - keeping it fresh and different from most books out there that are still acceptable to be read by nearly any age. With twists and turns and lots of surprises, The End of the World Club is easily recommendable.

And I am already wondering when the third book will be coming out. And if it really must be the last. Because I would love more than one more book of these characters!

May 23, 2018
Next Wednesday y'all will be getting my oh-so-humble opinion of Evangeline of the Bayou , the Summer 2018 Kids' Indie Next List selection! (That means it was picked via booksellers at independent bookstores countrywide.) Until then, I have a Q&A with the Louisiana born and raised author herself: Jan Eldredge! (Don't forget to come back next week for my review!!) A Conversation with JAN ELDRIDGE Author of Evangeline of the Bayou 1) The glossary in the back of the book is so helpful! Where did you learn about all these creatures? Which creature from the book is your favorite? I have a small, but growing, collection of books about mythical creatures around the world. If I couldn’t find what I was looking for there, I researched library books, online websites, and the occasional documentary. Something that really surprised me as I started learning more about mythical monsters was the number of different cultures that share very similar
12 comments
Read more

July 14, 2017
In my final day of participating in the I Read YA Week celebration (you can keep partying, it goes on through Monday!), I found myself presented with a new challenge of: Create a graphic showcasing an inspirational YA quote. I'm not super tech savvy and I've never created a graphic before. But with just a little Google searching and a download of an app, I was able to create this: Thanks for joining me this week! I hope you all enjoyed it! Please follow or subscribe for notifications of new posts and reviews upcoming on the Bibliophile Support Group! #YAStandsFor @IReadYA
8 comments
Read more