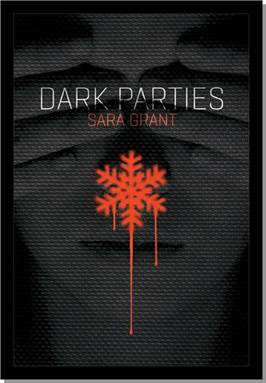 Dark Parties is a suspenseful dystopia-like YA novel by debut author Sara Grant.

At sixteen years old, Neva has no choices. In Homeland, where she has lived her entire life, everyone is cut off completely from the outside word by a sphere that keeps them "safe". After all, they've been told that everything outside Homeland is a wasteland - they'd never survive out there. In order to avoid the conflicts that come from inequality, the government has strived to make everyone more equal through appearance - to the point where Neva looks very, very similar to everybody else.

She's seen more and more options taken from the table, to the point of now being assigned a job at sixteen. And as the population dwindles it seems that the government primarily wants her to get married and start a family. In fact, she's not sure they're even particular about the getting married part.

But Neva and her best friend, Sanna, have felt there's more going on. Neva has kept a secret journal notating how people go missing, never to be spoken of again. The first one she remembers is her grandmother - though her parents have never spoken of her since she disappeared. So Sanna and Neva plan a "dark party" to begin planning a rebellion. They want to start speaking out about how the government is actually scaring them, not protecting them - and how they aren't so convinced there's nothing else besides Homeland.

Yet nobody realized the unimaginable revelations they would begin to uncover... and what kind of danger it would put them in...

To be honest, I'm not sure my synopsis there does Dark Parties justice. I just didn't want to give away too much! Thing is - this is a phenomenal book! I'll just lay all my cards on the table immediately - I was floored.

I read a lot - a lot. And most of you do, too - after all this is the Bibliophile Support Group. And sometimes, because of all that reading, you start to get a familiar feeling with books - you might get better at guessing where they're going or feel that characters are kinda similar to each other.

Dark Parties is one of those books that wakes you up a bit. It put me back in that "reader mode". I almost forgot I was going to be reviewing it later - I was just purely in the narrative, wholly and completely.

I don't want you to think I haven't felt this way for a long time or anything - there have been some other utterly fantastic books I've been reading this year, truly. It's just that this was definitely one of them - and probably will be making my Best of 2011 list on New Year's Eve.

It has a stark, simple prose that presents a harrowing, bland futuristic reality where there is such a lack of individuality that it's appalling. These teens go to such lengths to feel different from one another - lengths I don't want to spoil for you - that it just grabbed my attention immediately, as it was so unique and incredibly effective.

There's a mystery, suspense, claustrophobia, fear, and fierce need for identity that drove the novel early on - and continued. Neva's determination and quiet rebellion is heroic and likable - she's a strong female character that struggles with her personal issues while refusing to give in to the dank yet dangerous Homeland.

As the book continued, it only became more shrouded in secrets and lies. And ooooh was it intriguing! Not to mention a forbidden, intense attraction that Neva develops for a guy she wants nothing to do with it, the anguish of betrayal, and the terrible loneliness of being trapped in a life you've been forced in - Dark Parties is flat-out stunning. And absolutely impossible to put down!!!

Dark Parties reminds us why the choices we make as individuals and the differences between us - appearances, points of view, personality - have far more positives than negatives. We don't want to lose that. So we understand that hunger to get it.

This book is romantic, painful, honest, scary, and engrossing. I was so into it, so involved in each horrifying twist, that there were moments near the end where I was practically forgetting to breathe. I became one with the narrative and it was all about turning pages - the clinically diagnosed bibliophile in me was fully alert.

Dark Parties has shocking revelations that will turn your stomach, character development that will break your heart one moment and make you cheer the next, and an end that gave me goosebumps and chills.

If this is only your debut Sara Grant - what can we expect from you next?!

*I received a review copy of Dark Parties from Hachette Book Group. Their generosity in no way influenced, nor sought to influence, my opinion of the novel.

May 23, 2018
Next Wednesday y'all will be getting my oh-so-humble opinion of Evangeline of the Bayou , the Summer 2018 Kids' Indie Next List selection! (That means it was picked via booksellers at independent bookstores countrywide.) Until then, I have a Q&A with the Louisiana born and raised author herself: Jan Eldredge! (Don't forget to come back next week for my review!!) A Conversation with JAN ELDRIDGE Author of Evangeline of the Bayou 1) The glossary in the back of the book is so helpful! Where did you learn about all these creatures? Which creature from the book is your favorite? I have a small, but growing, collection of books about mythical creatures around the world. If I couldn’t find what I was looking for there, I researched library books, online websites, and the occasional documentary. Something that really surprised me as I started learning more about mythical monsters was the number of different cultures that share very similar
14 comments
Read more

First Step: Admit You Have a Problem

January 10, 2010
Hi fellow Bibliophiles! I have been rather neglectful to this blog... instead continuing to stay buried in a book as I have during the holidays. I'm hopeful that most of you have been doing this too and can easily accept my apology. Have I been reading? Um, yeah! (Translation: duh.) Just haven't been able to pull myself away long enough to actually WRITE about what I'm reading. Lol. But that's me, a bibliophile, an addict, an addict who's fallen off the wagon and fully embraced her love of reading - especially with all this free time to do so!!! I've also been watching awesome holiday movies, eating yummy, but bad-for-me, food and hanging out with the people I love best! You too? I hope! ;) Anyway, I will return with a new book review next week, most likely on Monday or Tuesday. Thanks for your patience and keep reading!!!
Post a Comment
Read more